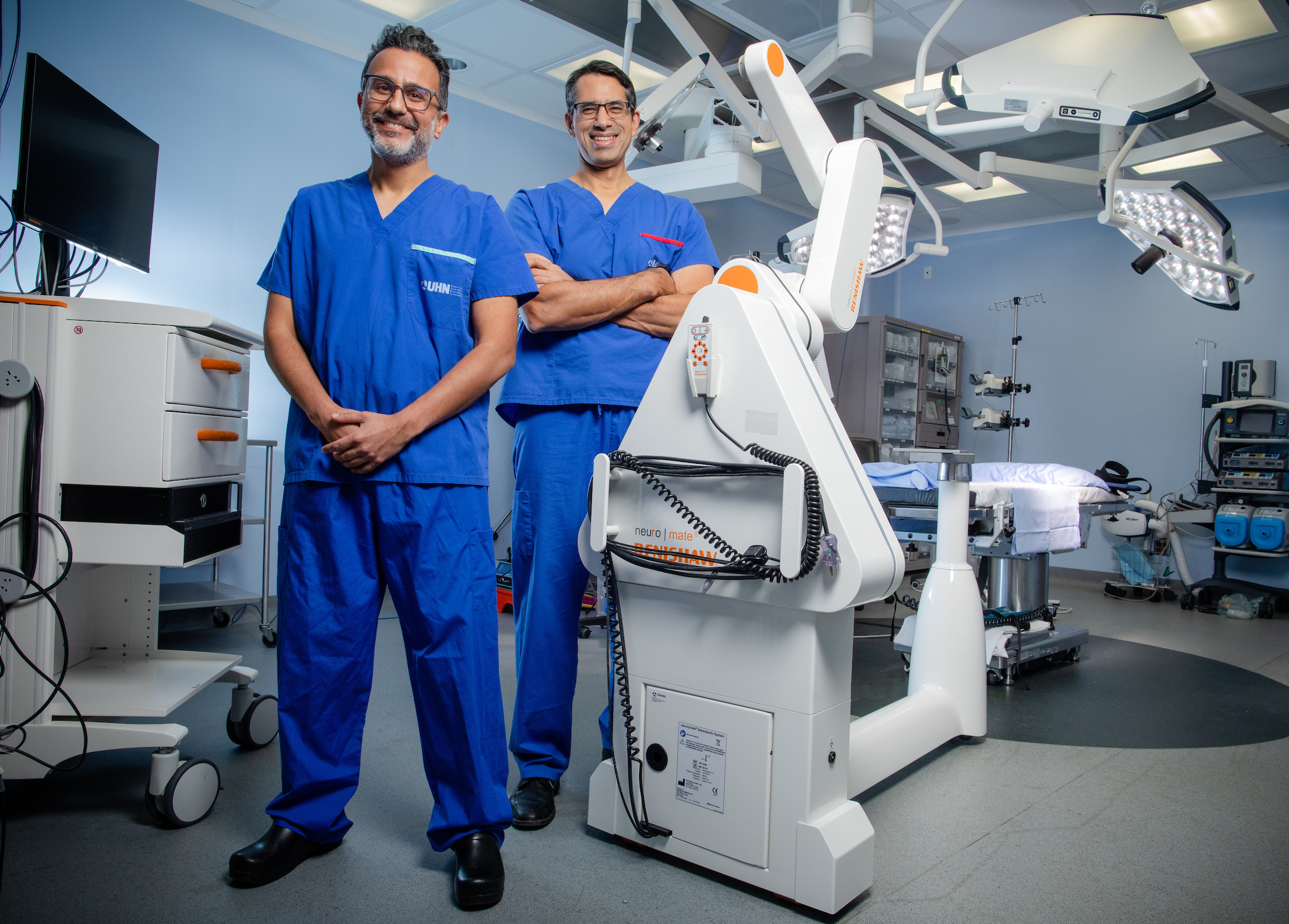 December 10, 2017 started out like any other day for Tyler Anderson. He’d put in a full day of work – building cottages near Dorset, Ont., for his own contracting business – before heading home to get ready for wing night, a weekly staple for him and his friends.

Hopping into his two-seater truck to make the 15-minute drive into town was routine for Anderson; he could probably reverse out of his steep driveway and onto the roadway blindfolded. But that night, he had about three feet of snow to contend with and when he started backing out his truck, the wintery conditions caused it to slide.

“It was a pretty steep hill … and my tires started spinning out because there was so much snow,” Anderson recalls.

Realizing he was losing control of the vehicle, he threw his gearshift into neutral to try counter-steering away from the tree he was sliding into.

He almost missed it.

“I smashed my head off the back windshield behind me,” Anderson remembers. “The car wasn’t even moving at more than five kilometres an hour.” Thinking nothing of it, he freed his truck and continued on to meet his friends for dinner. “I was absolutely fine,” he recalls.

But shortly after the accident, the seizures started. “I’d wake up and there’d be chunks missing out of my cheek and tongue (from uncontrollable biting during the seizures). I had no idea what was happening.” Sometimes he’d unknowingly suffer multiple seizures in one night, feeling sick, dizzy, lethargic and just plain out of it the next morning. As someone who was rarely home, Anderson suddenly found himself stuck there out of pure exhaustion. “I couldn’t really do anything,” he remembers.

It wasn’t until a hospital trip six months later, after Anderson’s father coincidentally moved back in and heard him thrashing around in his bed one night, that they discovered the seizures were the culprit and the accident was to blame. At first, he saw a team of neurologists in Krembil Brain Institute’s (KBI’s) epilepsy program. About two months later he was referred to Toronto Western Hospital’s CenteR for Advancing Neurotechnological Innovation to Application (CRANIA) – a partnership between the KBI and KITE – to receive more specialized treatment.

The multidisciplinary care team at Toronto Western, comprised of world-class experts ranging from neurologists to neurosurgeons, first set out to determine where Anderson’s seizures were being triggered so they could hopefully remove this section of his brain and eliminate his seizures completely. But the results of Anderson’s complete Epilepsy Program Workup, which involves tests and scans like the non-invasive electroencephalogram, or EEG, test (where small metal discs with slim wires, or electrodes, are adhered to a patient’s head and attached to an interface that records brain activity) could not specifically identify where the seizures were coming from.

As a result, his clinicians suggested he undergo SEEG or stereoelectroencephalography. “An EEG is like trying to listen to conversations that are happening in the room next to you by pressing your ear against the wall. That’s a little bit different than dropping a microphone into the room and hearing every word of each individual conversation,” explains Dr. Suneil Kalia, a neurosurgeon at Toronto Western Hospital, scientist at the KBI and Co-Lead of the Neuromodulation Suite Core, of the precise results SEEG procedures can provide. This is because in SEEG procedures, electrodes are implanted inside the patient’s brain rather than outside on the scalp.

The promise of technology

Getting electrodes inside the brain is no simple task, but there is one thing that makes it a little easier: robots. In 2019, Toronto Western acquired the Renishaw Neuromate with funds from a Canadian Foundation for Innovation (CFI) grant for CRANIA, to assist with invasive brain procedures like SEEG, and to research and develop optimized workflows in the operating room. The robot sort of looks like something you might see in a dental office, but it’s far more impressive. It has a sleek, creamy-white design with orange accents and a single mechanical arm to which several accessories can be attached. While the robot doesn’t exactly act as a third, automated neurosurgeon, it does help human neurosurgeons like Dr. Kalia and Dr. Taufik Valiante – a neurosurgeon, neuroscientist, CRANIA Co-Director and Director of the Surgical Epilepsy Program at the KBI – carry out safer and shorter SEEG procedures (the robot has assisted with more than 40 now) by facilitating particularly complex parts of the procedure.

You could imagine a day when the robot basically does the entire surgery itself, with human oversight. – Dr. Taufik Valiante

Take the electrode insertion, for example, which Dr. Kalia and Dr. Valiante had to do manually prior to using the robot, and, they say, is a cognitively demanding process. “It’s actually quite tiring to put in 16 electrodes. It’s a very repetitive activity and you can make an error easily,” explains Dr. Kalia. The procedure is much easier to complete with the robot. It can be programmed like a GPS, where it’s directed to visit specific destinations around a patient’s head. This automated process substantially reduces the risk of human error and also results in a quicker procedure (one study says the robot can reduce implantation time per electrode by almost 20 per cent). Shorter operation times mean minimized opportunity for infection and increased comfort for patients like Anderson, too.

40+: The number of SEEG procedures the neuromate robot has assisted on at CRANIA.

The old SEEG procedure method also included a rigid arc that would sit atop the patient’s head, limiting access to certain brain locations and creating inconvenient obstacles for neurosurgeons to navigate in the moment (like figuring out an entirely new pathway to a specific brain location in a matter of minutes). But thanks to the robot, these issues have been eliminated entirely. “The robot provides remarkable flexibility in how you can actually target the area where you want to go,” says Dr. Valiante. “You’re not restricted by the physical nature of the arc.”

For Dr. Valiante, access to these types of innovative tools is exciting because of their clinical potential. “You could imagine a day when the robot basically does the entire surgery itself, with human oversight.” Not only would this eliminate risk of human error, but it could also lead to richer pools of data and perhaps more efficient electrode implantation. Dr. Valiante looks forward to a time when he might be able to communicate with the robot like another doctor, asking it to consider, based on previous procedures, where electrodes should be delivered in a new patient in order to achieve the best results.

For right now, though, the neuromate robot is changing the game for patients like Anderson. In March of 2020, after months of careful planning and data analyzing, Dr. Valiante and Dr. Kalia used it to implant eight electrodes deep into his brain. Not only were they finally able to figure out where his seizures were coming from, but they were also able to determine Anderson’s eligibility for another operation (in which Dr. Valiante actually removed the seizure-causing part of his brain) that has now rendered him seizure-free for over a year.

Anderson has since been able to reopen his contracting business (he had to close it for almost three years due to the seizures) and start playing hockey again, which he had played nearly every year since he was six until the accident forced him to stop. He’s most excited to start driving again and returning to building cars – one of his most treasured pastimes. And while Anderson has Dr. Valiante, Dr. Kalia and the rest of his medical team to thank, he also owes some gratitude to another invaluable team member – the robot. “The procedure changed my life completely,” he says. “I went from not being able to do that much to getting back to it. I got my freedom again.”

This story is part of The Game Changers, a storytelling campaign featuring some of the groundbreaking research, innovative ideas and incredible people we have working behind the scenes to redefine the future of rehab at UHN. The series will run monthly through the rest of 2022 putting a spotlight on every corner of KITE, from our trainees, staff and scientists, to our labs, clinics and even the operating room.