MyndTec brings one of KITE’s scientific breakthroughs to market 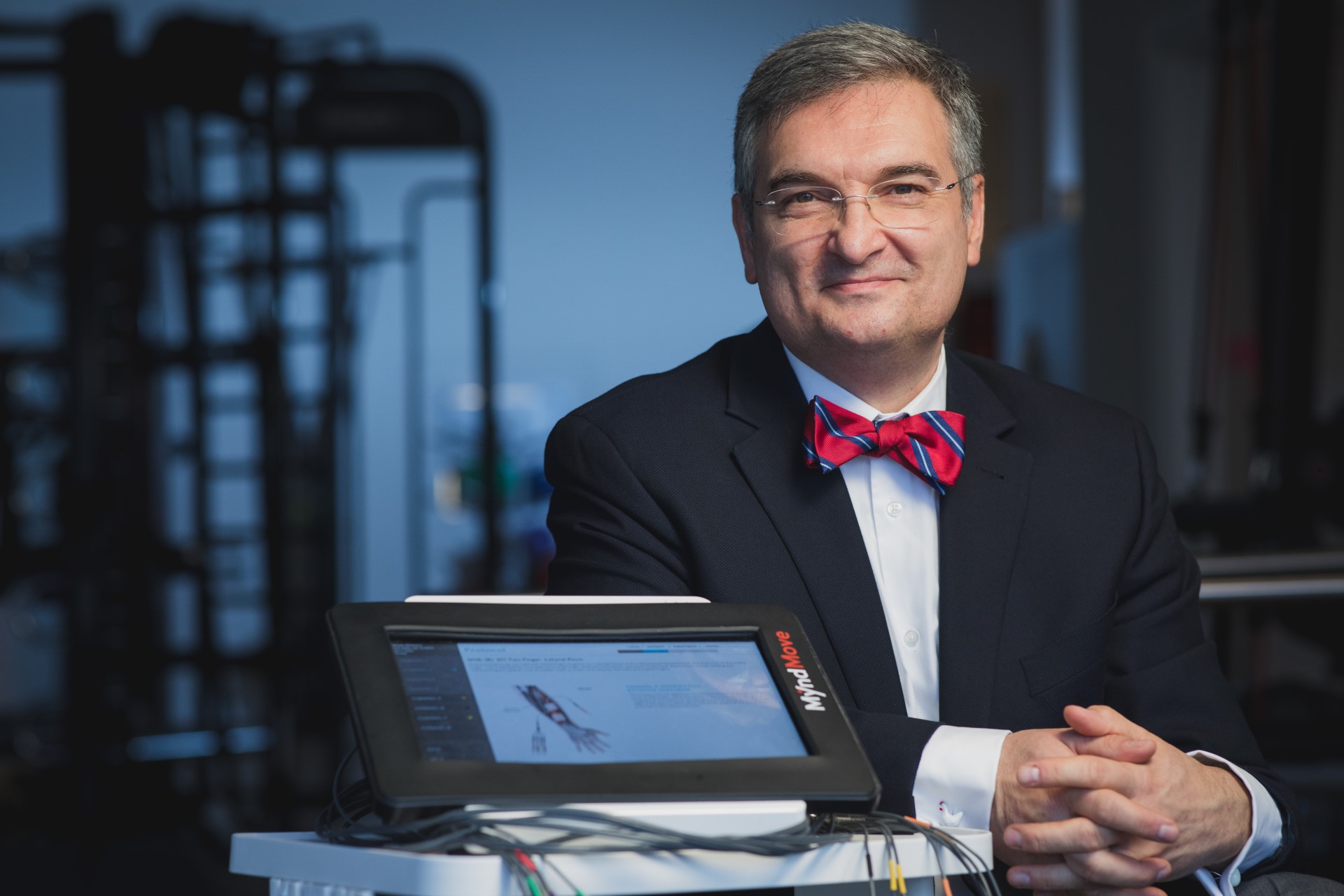 In April of 2020, Sobhan Chowdhury felt a strange tingling sensation in his arm and leg and worried that something was wrong with his body. He had a family history of stroke, and even though he was only 53 years old and an active husband and father, Chowdhury knew that he was at a significant risk of experiencing a devastating or even fatal medical event. He went to a hospital near his home in the small community of Deep River, Ont. Although, his symptoms initially seemed mild and intermittent, he eventually collapsed in the hospital washroom, and was subsequently diagnosed as having suffered a stroke. It wasn’t long before he couldn’t move the right side of his body, leaving him without the ability to walk, work and perform most other basic daily tasks.

Because of his remote location and pandemic-related restrictions, Chowdhury had little opportunity to undergo rehab for several months. In January of 2021, though, he relocated to Toronto and started his rehab at Toronto Rehab’s Upper Extremity Clinic. For seven months, he received rehab to help improve his arm and hand function. This included spending up to five hours a week with his right hand and arm attached to a series of electrode pads.

The electrical stimulation device that was used is called MyndMove, a revolutionary technology that employs electrical stimulation to treat motor disabilities caused by stroke and spinal cord injuries. While it was only one piece of Chowdhury’s extensive rehab regime, it has been an integral part of his journey to recovery. “I was very affected by my stroke,” he says. “There has definitely been a lot of improvement through MyndMove.”

MyndMove is a commercial product delivered through clinics and hospitals in Canada and the U.S. through a startup called MyndTec. It is used to help retrain arm and hand function following conditions like stroke. While patients like Chowdhury don’t give much thought as to how the technology gets from the lab to the electrodes on their hands, the story of MyndTec involves a lot of innovative and out-of-the-box thinking from researchers at KITE.

Its technology was developed over the course of more than two decades by a lab led by Dr. Milos Popovic, KITE’s Research Director, who has long been interested in the field of electrical stimulation and its application to treat motor disabilities. While the idea of stimulating a patient’s extremities with electricity isn’t new, he and his colleagues developed a device that works on multiple muscle groups in the hands and arms to help patients accomplish specific tasks like reaching or grasping.

Initially, the hope was that electrical stimulation devices would help people perform functional movements with the assistance of the machine. However, research showed that repeated use of both electrical stimulation and specialized therapy could restore the connection between the brain and the limbs, allowing patients to eventually perform those movements independently. The technology works by delivering electrical stimulation to a patient’s muscles, which in turn sends a signal to the brain, thereby strengthening these pathways.

30: The number of pre-set algorithms within MyndMove that train a patient to perform basic upper body extremity tasks.

Using the concept of neuroplasticity, which refers to the brain’s ability to modify and adapt its functions, the stimulation helps the brain relearn how to perform these movements in the impaired limbs. “In layman’s terms, a person who is not able to eat by themselves can progress to being able to eat by themselves with the help of this therapy,” says Dr. Naaz Desai, a KITE research associate and physiotherapist who worked on the MyndMove technology from inception through to its commercialization. “There’s a ripple effect in that it takes the burden off patients, caregivers and the healthcare system, and more importantly, improves the patient’s quality of life and ability to go out into the community.”

MyndMove takes the burden off patients, caregivers and the healthcare system, and more importantly improves the patient’s quality of life and ability to go out into the community. – Dr. Naaz Desai

This breakthrough should have been a no-brainer for commercialization, but KITE is not in the business of manufacturing medical equipment and needed a private company to take the technology out of the lab and into working clinics. Dr. Popovic started to look for a commercial partner to take these next steps and became frustrated by the lack of interested parties. Knowing that this technology would vastly improve countless patients’ lives, he took his own measures to bring his research from “bench to bedside” and started a company himself. Dr. Popovic co-founded MyndTec in 2008, and by 2015, MyndMove therapy was available to patients.

After being heavily involved in the early years of MyndTec, Dr. Popovic ended up finding people with business experience, including current CEO Craig Leon, to run the company so that he could focus on his research. MyndTec still has a close relationship with KITE, whose team is currently working on a new device that will help patients regain their ability to walk after a stroke or spinal cord injury. With researchers keen to see their work benefiting patients as quickly as possible, and business people unable to do the research and development needed to produce breakthrough medical devices, Dr. Popovic sees this kind of partnership between academic institutions and commercial ventures as something that KITE will continue to pursue in the future.

“A good part of the future of KITE is tied to these kinds of partnerships. The number of people who are aging and have disabilities will soon be almost 50 per cent of the population. The market is shifting and this is our space,” Dr. Popovic notes. “KITE is focused on creating technologies that can be rapidly commercialized and delivered to the market so that people can benefit from them immediately.”

Ultimately, the end goal of any research is to help patients like Sobhan Chowdhury. While his journey to full mobility is ongoing, when he looks at his hands and sees the progress he’s made, he’s happy MyndMove came to market. More importantly, he’s thrilled that he’ll eventually be able to return to work again and live a full life with his family. 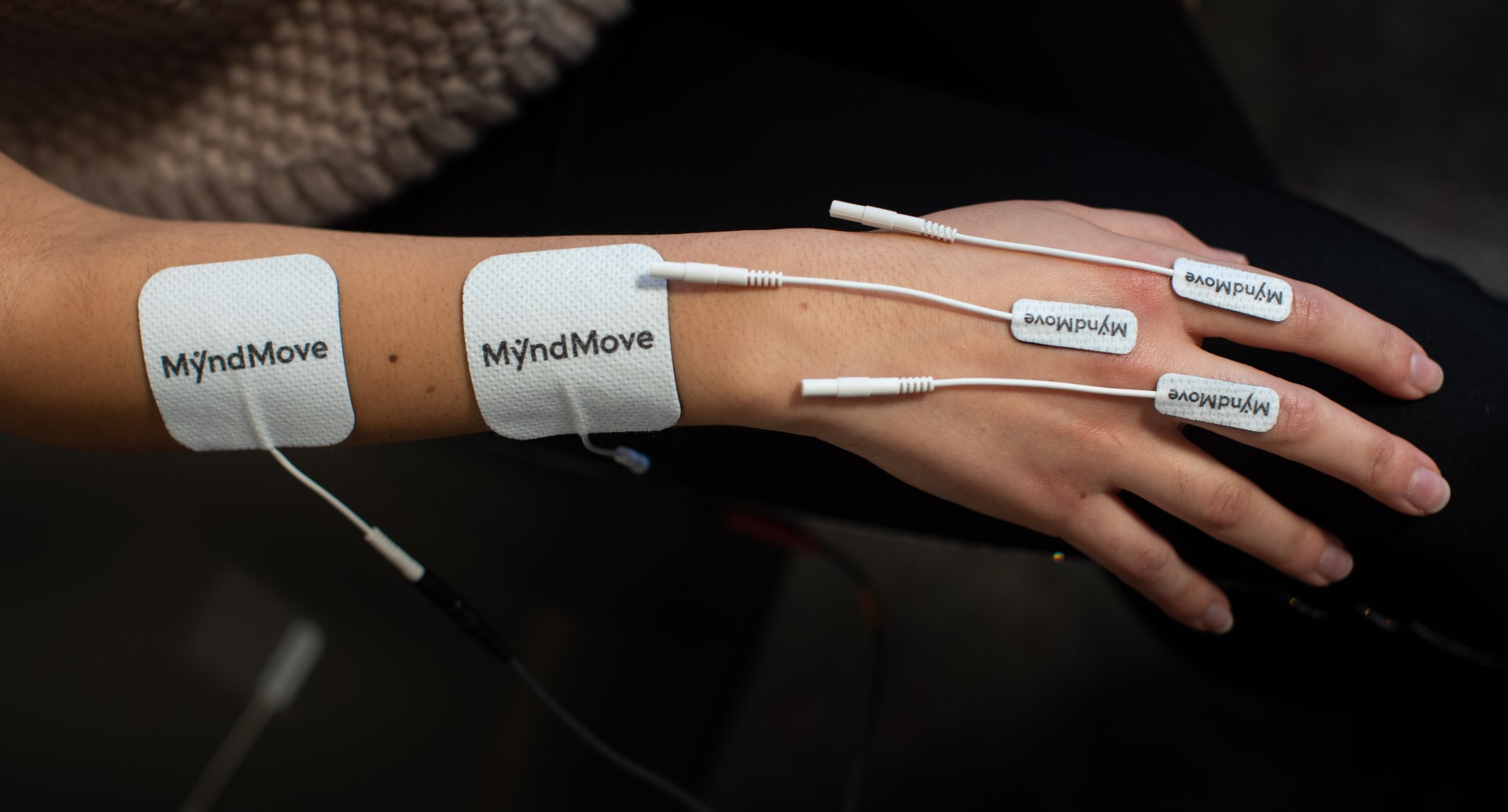 “If people see my left and right hands sitting together on a table they wouldn’t be able to tell I don’t have function in my right hand because of the strength and size of my hand. This hand works because I’ve made it work,” Chowdhury says. “People really should take advantage of this technology.”

This story is part of The Game Changers, a storytelling campaign featuring some of the groundbreaking research, innovative ideas and incredible people we have working behind the scenes to redefine the future of rehab at UHN. The series will run monthly through the rest of 2022 putting a spotlight on every corner of KITE, from our trainees, staff and scientists, to our labs, clinics and even the operating room.